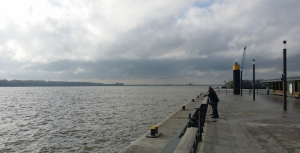 The Willkomm Hoeft is surely unique to Hamburg, and such a fascinating sonic location that I took a special car trip out just to record there, even though it’s a long way from the city, as you can see. Here’s the deal: every ship that enters or leaves the port is logged according to its country of origin, and the Willkomm Hoeft plays out its national anthem through huge speakers to welcome it, or to bid it adieu. Even on a weekday afternoon, there was a small crowd sitting on the quay taking in the spectacle, including a couple of old men who’d brought down food and a flask of coffee to make an afternoon of it. As you can imagine, the combination of ship sounds and these fantastic blasts of music were exhilarating to hear, especially when the ships tooted their appreciation with a foghorn blast.

The Willkomm Hoeft also captured the imagination of remixers, with no fewer than three remixes from the same location – so it’s fascinating to hear how three people experienced and heard sounds from the same place. First up, Colin Ventura’s take on the sound of the Rickmers Seoul of Majuro passing by.

“It all comes down to slicing out parts that I like and think will work and using them as samples played via keyboard and then layering and occasionally distorting the results. I came up with two in the first instance because in one I sampled the three tones individually, and in the other keep the three as a single sample.”

listen to ‘Japanese ship receives a Hamburg greeting’ on audioBoom