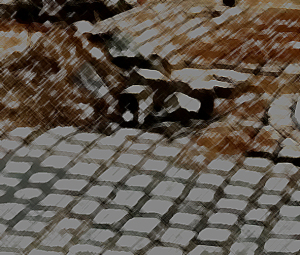 Roadworks can sound pretty much the same anywhere, but there was something captivating about these. Firstly, the use of machines was minimal – this was hard manual labour, and sounded like it. Secondly, the avenue where they took place was wide, and surrounded by tall, imposing buildings – which means every single hit of the pick has a swooping reverb to it that filled the entire street, which made it well worth recording. The city is not always in perfect health – the city needs to be tended and nurtured, and here’s what that sounds like.

Aaron Rieger of Albuquerque, New Mexico, picked this sound out from our collection, and says:

“To keep the spirit of the project intact, I opted only to use the existing recording, no additional sounds added. It was a challenge, no doubt; I couldn’t base the remix off a rhythmic pattern like before <a previous reworking of his from the Eden Project>. It was only after running the sounds through processing and EQ that the remix began to take shape.

“The original recording inspired me to experiment with the imaginary spatial characteristics, moving between channels and playing with echo and volume. The recording itself lent very well to being processed as a low-end rumble, giving the remix a dark, cavernous impression. The result is a sort of narrative; a descent into some busy, cramped mineshaft, the ambience ebbing and flowing until re-emerging back to the surface.”

listen to ‘Caution! Roadworks ahead’ on audioBoom

listen to ‘Memories of roadworks’ on audioBoom