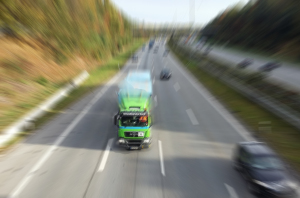 We get off the bus a couple of stops early and take a walk to see a bit more of suburban Hamburg, or at least a little further away from the centre, and the road we walk down goes directly over the autobahn running into the heart of the city. As you might expect, it’s fast and loud, but by standing on the bridge directly over the hurtling trucks, it’s also quite exhilarating, as far as roads go – you can feel the airflow from the trucks zipping just underneath you.

The remix was a nice surprise – Emmanuel Galvan took the sounds of speeding traffic and turned them into something altogether relaxing, ambient and rather beautiful, as he explains:

“I’ve always been fascinated by the sound of traffic and cars and the idea of “traveling” they convey. They bring back memories of my road trips and travels. I suppose this was my starting point. I used a technique I am quite familiar with by now, consisting of creating resonant frequencies of any given sound, in order to create harmonies and pads that sound quite ambient, deep and peaceful. This was then complemented by the use of the original field recordings with various effects, such as reverb and delay, that I think contributed to the overall atmospheric feel of the piece. Finally some granular synthesis helped me create some textures to help with a sense of movement and texture.”
City version:

listen to ‘Speeding autobahn traffic in Hamburg’ on audioBoom