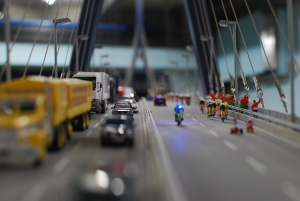 We’re off to Miniatur Wunderland! Hamburg’s tiny version of a theme park like Disneyland, more or less, took 500,000 working hours to complete, according to their helpful and entertaining video (see below!). It’s one of the chief tourist atttractions of Hamburg, the world’s largest model railway, and a complete model world covering many of Germany’s biggest cities, plus areas from other European countries like Switzerland and Austria, and a nod to the Wild West. The dioramas are strikingly detailed and laden with humour, as you can spot everything from Elvis to aliens if you look closely enough. As a strikingly visual spectacle, we wondered what it might sound like – not too many people consider the sound of attractions that are so completely visual. The squeaking of model railway trains running past our microphone coupled with the sounds of excited people (mostly children) make for a unique sound, as well as sight. This place is fun!

Oslo’s Leon Muraglia has transformed a childhood paradise into the stuff of nightmares, all slowed drones and machine thrumming – not a place I’d take young children for a day out, for sure.

listen to ‘The world's biggest model railway’ on audioBoom