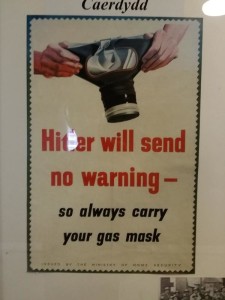 Today we take a trip to the outbreak of the Second World War, via a visit to Cardiff Castle in Wales.

A World War 2 exhibition inside the castle became an extremely unnerving soundscape – while walking around the ancient stone interior of the walls, suddenly 1930s radio broadcasts, the sounds of bombs and air raids, and Winston Churchill’s famous speech declaring the outbreak of war broke the peace.

The juxtaposition of a medieval castle and fairly recent history alongside the unexpected nature of the sounds suddenly appearing made for a disconcerting experience (and therefore an effective exhibition, I guess!). So this field recording started out as one thing but ended up as something completely different; a fortuitous discovery.

For the reimagined version, Oxfordshire musician This Little Piggy (James Pamphlion) took up the reins, layering heavily effected guitar over the sound of bombs and air raids, and some subtle, creeping melodies over Churchill’s speeches to add a sinister edge to the sound. If you listen closely, you can even hear buried snippets of a Hitler speech within the loud section as a counterpoint to the Churchill top and tail on the piece.

listen to ‘Winston Churchill inside Cardiff Castle’ on audioBoom