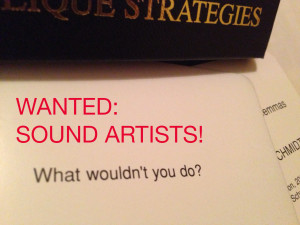 What happens when you combine field recordings from around the world with Brian Eno’s Oblique Strategies for creativity? Throughout March, we’ll be finding out in our new project Cities & Memory: Oblique Strategies.

We’ll be asking sound artists and musicians to take a field recording of their choice, and then reimagine and remix that sound using Eno & Schmidt’s oblique strategy cards as a guide and inspiration for their new version of the sound.

The results will be part of a special ‘oblique strategies’ section on Cities and Memory, and the highlights will be released as a digital album at the end of March.

Artists will choose their own source sound from our database (or their own field recordings), but will be randomly assigned two oblique strategy cards to work with – which they can interpret in any way they see fit, using either or both, or having the two instructions interact with one another. The resulting sound must be based on or contain elements of the original field recording, and will be inspired by the approach suggested by the oblique strategy cards, and the artist’s interpretation of those ideas.

It’s an open call for participants, and the deadline for getting involved is Friday 6 March. Participants will then have until 31 March to produce their oblique strategy-inspired sounds.

Interested artists should get in touch with us ASAP. The call is open to sound artists and musicians worldwide.