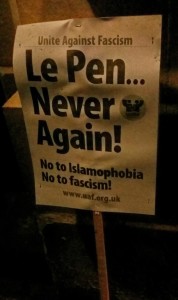 It’s protest week here on Cities and Memory, with sounds from a couple of political demonstrations coming your way over the next couple of days.

The sounds of protest are rapidly becoming one of the defining sounds of our age, as people find their voice and express their passion and beliefs on a whole range of topics.

Here are some sounds from a recent anti-fascist protest against the Oxford Union for allowing French right-wing politician Marine Le Pen a platform to speak.

A hundred or so protesters lined the street outside the Union with klaxons, megaphones and placards, and the story was plastered over the local media.

From the sounds of protest come some very interesting reinterpretations, as we saw when we featured some anti-ISIS protests in Hamburg recently – and here Irish sound artist Drombeg has turned the Le Pen protest into a wistful thing of beauty with layered piano and pad synths. Enjoy.