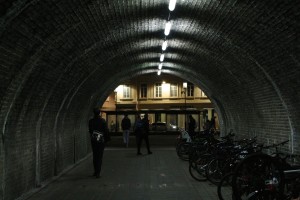 We’re heading into a sinister tunnel of reverb and drones today. Alongside Bath Spa rail station, there’s a brick tunnel leading through to river, at the back of which are the kitchens of several restaurants.

You can hear the buzz and drone of extractor fans and air conditioning, and the intense reverb of the tunnel itself in this field recording.

All of which lends itself to a rather dark reimagining by Robert Cole Rizzi, who’s layered several instances of the effected drone, but then filled the top end of the sound with some glockenspiel to lighten up the overall mix.

It’s a great reinterpretation of what that space could sound like, and works especially well in the installation mix, in which you can hear both sounds playing off one another in tandem.

listen to ‘Drones from the tunnel’ on audioBoom