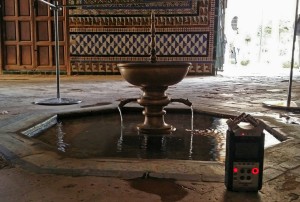 Just around the corner from the main fountain in Casa de Pilatos, Seville, is another tiny fountain that emits a fascinating buzzing sound alongside the usual water noises you’d expect – it was a must-capture sound for the travelling field recordist.

We handed the sound over to artist Nick St. George, who transformed it into his second contribution to Cities and Memory like this:

“I started this piece by treating the field recording in a number of ways. One result reminded me of old school tone generators – hence the synth pattern early on, which re-appears at the end. Another version had definite train-like qualities, and when I found on Freesound a recording of a train conductor making announcements on leaving Seville that was just a marriage made in Sound Art heaven!”

“I juxtaposed some flamenco guitar (clichéd, yes, but unavoidable) with the oud to remind us of the Moorish influence on the city. I added a touch of my own cajón playing (a Peruvian instrument, but strongly associated with Spain), some royalty-free flamenco singing, a marching band recorded in Seville (also courtesy of Freesound) and liberally sprinkled the whole thing with more water (drips from a cave – thank you, Apple Loops).”

“It’s more fragmentary / impressionistic than my last Cities and Memory piece (Fanny Burney RIP) and doesn’t have the narrative of that. But I trust it still achieves the aim of “re-imagining” a small corner of Seville…”