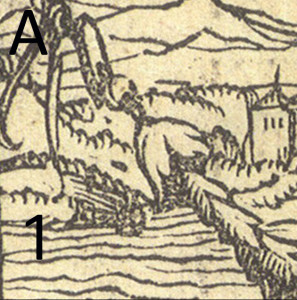 Every day for the next few weeks, we’ll be taking you on a tour of our Utopia project, examining in a little more detail how some of the individual artists considered their approach to the project, and what they were thinking about when designing their own little part of Utopia.

We divided the 1518 woodcut map used for the project – which is from the second printed edition of the book – into 30 grid squares, labelled as columns A to E, and rows 1 to 6.

Artists chose a square and developed a sound based on what was in that part of the map, on their response to the concept of Utopia, and often to specifics within the text of the original book.

We begin, sensibly, with grid reference A1, the top left of the original map (see image), which was tackled by Tim Waterfield and Steve Burnett.

“I wanted to communicate the feeling of being a foreigner in a new country and not knowing what’s happening or where to go, so here I was trying to pick up on the the feeling of disorientation throughout.”

“My section contains a neighboring shoreline with some buildings, and a large decorative branching structure that I chose to interpret as bridge-like in nature from the shoreline to the central crescent.

I made field recordings on various bridges in my area and then selected short moments of quiet from the recordings where nothing in my immediate vicinity was happening in order to focus on the sound of the open space and activity in the distance. As the shore and bridge-like structures both involve water boundaries I faded in and out the short segments of open ambience to resemble waves lapping against a shore or a structure.

As everything in More’s Utopia is ideal, I spaced the wave-like sounds with periods of silence derived from the golden ratio, using the first fifty digits.