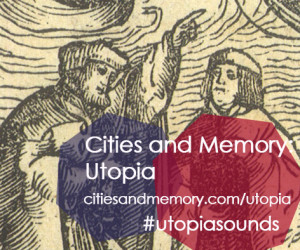 We’re proud to say that our latest project, Utopia, launches today, with contributions from 51 sound artists from right across the world.

The Cities and Memory: Utopia project creates something new from the words of Thomas More’s Utopia and the collective imagination of artists around the world – an entirely new Utopia of sound.

Using a woodcut map from the second edition of Utopia from 1518, sound artists each took a small section of More’s imagined country of Utopia, and created a new soundscape imagining how that place (and the society living in it) might sound.

The result is a collaborative sonic imagination of what More’s Utopia might have sounded like, and deals with issues including slavery, religion, freedom and even the current refugee crisis in Europe.

The project is housed on an interactive sound map at www.citiesandmemory.com/utopia, featuring:

The sounds range from musical tracks built out of field recordings from Italy, France, USA, Australia and many other locations;  drone and ambient pieces; pieces constructed from readings of the original text and other works; imagined conversations on the island; and even full-scale electronica tracks.

Contributing sound artists come from locations all over the world, including the UK, USA, Canada, Greece, Germany, Spain, Portugal, Australia, Mexico and Sweden.

A free album of highlights from the project, entitled Utopia, will be released via http://citiesandmemory.bandcamp.com at the end of October to mark the end of the project.