Three new takes on the prison song ‘My Baby Got To Go’ today – interestingly, two of them independently bring in themes of trains as prison transport as a reading of the song’s lyrical content, as you’ll hear.

“Never have I agonised so much over a Cities and Memory project.

“You see, there are real human beings at the heart of this recording, not something inanimate like a fountain in Seville or a chapel in Bath. And what of those human beings?

“They could have been wrongly imprisoned – or maybe their incarceration was utterly justified. Were they cold-blooded killers or did they just steal some money in order to make ends meet? Whatever their crimes and circumstances, they (and their performance) deserved some respect. So I pussyfooted around the song for a while, tweaking this guitar break, treating that vocal – and the result was uninspired and insipid.

“Then I started to think about the train that features so prominently in the lyrics. Trains, in the context of imprisonment are interesting.

“They may be a means of escape – or how you are transported to jail. They can carry you to loved ones, or away from them. At speed, they can be deadly.

“So, I stifled my next bout of soul-searching (are trains just too damn literal in this context?), and went for it. I hope John Henry Jackson and A.C. Craig would, in some way, have approved.” 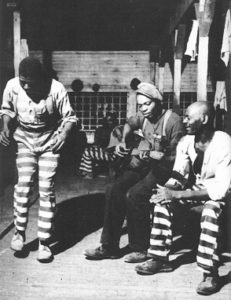 “In contributing to the Prison Songs project my objective was to create a piece that retained the spirit of the source material whilst re-imagining for a contemporary context.

“Despite a radical re-working, an echo of despair and loneliness connect Alan Lomax’s ‘My Baby Got To Go’ with the re-titled ‘A Train Is Coming’.

“This work was inspired by two themes; repetition and disruption, and the roots of this dichotomy were planted by chance. I was reading about the origins of the slogan ‘arbeit macht frei’ (work sets you free) that appeared, notoriously, at the entrance to a number of Nazi concentration camps during the Second World War.

“I learned that, in an apparent act of deliberate rebellion, prisoners who had to make the sign at Auschwitz I conspired to render the ‘b’ of the word arbeit upside down. I found the repetition of prison life (and, indeed, everyday life) coupled with the disruptions (‘little rebellions’) that serve to break up the very mundane interesting.

“The three parts of the piece tie (very loosely) with the three stanzas of My Baby Got To Go. The decision to only use fragments of the lyrics is reminiscent of a today’s environment, where our communications are often fragmented, partial and succinct.

“Part 1 establishes the themes of repetition and disruption, with some heavily distorted tones. It is not meant to be subtle.

“Part 2 is the most cohesive section, with a definite sense of melody, harmony and rhythm; structure.

“I found this one quite a challenge. Then I remembered that I’d found some old recording from the 1980s of some prison officers on some old tapes I bough a couple of years ago.

“There quotes about prisons. Mixed with samples from the original music recording I feel that the whole piece comes together really well.”