Three new versions of the prison blues song ‘Rock Me Mama’ today, from the UK and Mexico – and three very different approaches, as you’ll hear below.

“Having listened to this many times and being aware of Alan Lomax and his field recordings I wanted to capture some of the elements he was battling to control (echo, buzz, string hum, creaks, room noise and all the challenges of recording with a single mic).

“I wanted to link in a primitive way the raw elements of dub and “versioning” approach to original songs and these one take field recordings with the intention of looping the gaps between the chords (room noise, string buzz and slurred picking) to create something that captured the essence of the song and the person sat holding the mic.”

“I imagined the prisoner’s life as a loop of hard work and a perpetual loneliness feeling. I have a very close familiar living there, and everything I can think about him is that there’s not a real difference between living on a prison and living in the ‘free world’: we are allowed just to do the things that other people permit us, pay bills on a deadline, and the control is almost the same. 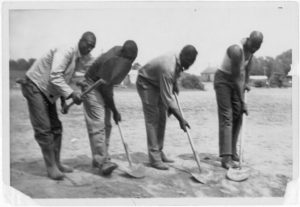 “We are enclosed in cars, subways, in the school, office, in a impersonal communication with others, till the point that ‘freedom’ doesn’t really means something.

“We are close, in the way of life, to the people in jails even if we constantly draw lines to separate the ‘bad guys’ from the ‘good ones’.”

“I was under the influence of many things making this… not least the music of On-U-Sound Records and Skip MacDonaId and his IittIe axe.

“Their remoulding of bIues, dub, souI, funk and originaI source recordings has been a favourite since my teens so its only fitting it surfaced here with this awesome source material.

“This song has been with me in various incarnations since my first VHS of Jimi Hendrix covering BB King’s descendant of this ‘Rock Me Baby’ so it was a treat!”