Two takes on the prison song ‘Duckin’ and Dodgin” today, one ambient and abstract and one taking the ‘old radio’ feel of the piece as its starting point and working from there. Interestingly, both artists tried several different executions and ideas before settling on the approaches you can hear here.

“This was a tricky project – so many possibilities! I experimented with numerous ideas including a full on expansion of the track involving drums, bass, organ, horn section etc!

“This more ambient version is based around the simple concept of being trapped somewhere unfamiliar and not being able to get back home.

“It was created in Reaktor 5 using various granular modules. No new audio has been added – everything in the piece is taken from the original recording.

“The pulsing strand was created from a short clip of the strummed guitar. The two deeper threads were created by manipulating fragments of the original vocal line.” 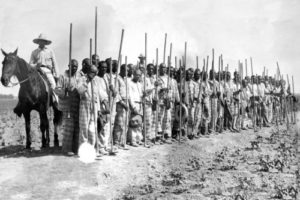 “From the beginning, my idea was to mess with the somewhat joyful vibe of the song. Even if the lyrics of the first two verses aren’t really party material, the whole thing still boogies quite a bit.

“I played around with a few different ideas all aimed at getting more “”prison”” and less “”song””. I tried isolating the vocals and replace the grooving guitar with something more somber, but it didn’t quite click.

“Then I had the idea of filtering the track to make it even more “”old-radio”” sounding than it already is, while varying the gain, in a slightly erratic way – reminiscent of poor radio reception.

“I mean, what are the odds of getting a good, strong signal, behind the steel bars and reinforced concrete of a prison?

“To add to the vibe, I whipped out a little contraption of my own making: two springs from a Luxo lamp, suspended over an empty 19 inch rack enclosure. Makes great steely reverb sounds when bowing the springs with a cello bow, and works well as a percussion instrument too.”