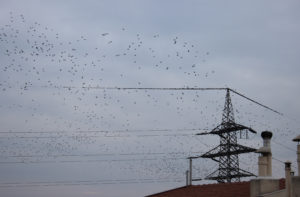 A stunning image by Alexandros Kantoros taken in Thessaloniki, Greece of migrating swallows:

“Late autumn, swallows gathering all together in a flock, near the edge of the city, before they migrate south. They would gather in an hour or less, before they all decided to fly in a go. While gathering, they all would sit on the wire, tweeting, every once in a while a part of them flying around and then sitting again on the wire. In the picture one of those acts is visualised.

“The picture was taken by a balcony, in the suburbs, a village-like neighbourhood with maisonettes. They were too loud and way to many tweeting, so they attracted my attention to go out and look what it’s about.”

Una Lee transformed this image into a striking piece for vocals and double bass:

“The piece is ultimately a duet of a spoken voice and a double bass, both of which contain elements inspired by the photograph of ‘migrating swallows’ in distinguished ways.

“The double bass, an instrument made of wood, performs sounds reminiscent of flapping wings, collective bird cries and building a nest; gestures implying movement of a flock; melodic lines that musicalise the visual created by the swallows in this specific photograph.

“The voice performs the poem ‘The House That Stood For Happiness’ by poet Maria Mcmanus. The poem itself is about a female blackbird, yet i chose it on account of its implication about home, yearning, nostalgia and sense of loss, which the photograph of migrating swallows evoked for me: always on the road, search for shelter, losing one’s purpose – Where is home? Have we lost it, or our ways? Do we remember where we’ve been? Where is it that we’re going?”