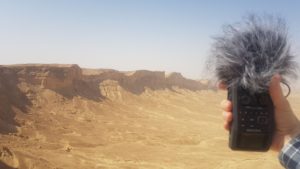 Come with us to Saudi Arabia today, as we explore the stunning sights of The Edge of the World, a striking feature in the desert an hour and a half outside Riyadh. The land ends abruptly, dropping off in a huge ridge of 400-metre sheer-drop cliffs as far as you can see, with a few that extends out into nothing but desert – a truly infinite space in which you can lose yourself.

The reimagined piece starts off as quiet as the Edge of the World itself, slowly bringing in externally-sourced wind and nature sounds until we’re no longer sure which is the desert wind of the recording and which are newly-introduced winds. Beneath this, a slow bed of synths creeps in to convey something of the awesome sense of isolation that the Edge of the World imposes on anyone who sees it.