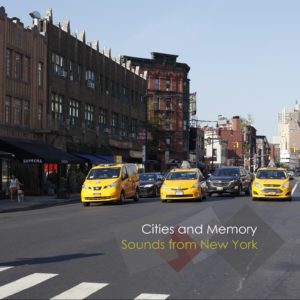 Our New York sound map contains some of the best-known sounds from the world’s most famous city, including:

– The iconic hissing steam coming from beneath the streets of Manhattan;
– The musicians and entertainers of Central Park;
– Top-class NHL ice hockey from Madison Square Garden;
– Highlights from New York’s incredible underground jazz scene;
– Exploring the sounds of the city’s most famous districts, from Greenwich Village to Chinatown.

You can explore the sound map here.

The reimagined New York sounds are just as fascinating, and feature work from sound artists who have spent their lives in NYC and know it intimately, as well as those who have never visited. Approaches include:

– A composition built around the words of Allen Ginsberg;
– A reconstruction of Greg Whitehead’s “If A Voice Like Then What”, using the sounds of New York;
– Using the names of NYC’s five boroughs as creative material from which to build a piece;
– Taking inspiration from the date on which Blade Runner became a thing of the past, not the future;
– A deep dive into the history of the New York City steam system.

There’s also a free compilation album of some of the highlights from the New York collection available to download from today – it features eleven fantastic reimagined pieces, plus as an extra bonus the original field recordings on which they’re based, so you can enjoy the sounds of the city wherever you go!