Today we pay a trip to the National Museum of African American History and Culture in Washington DC as part of our Smithsonian Treasures project – the item we’re examining deals with issues of race, identity and slavery.

The item is a first edition of the book Poems on Various Subjects, Religious and Moral, by Phillis Wheatley, while she was enslaved to Mr. John Wheatley of Boston.

The book has a brown leather cover, the original morocco spine label, and a frontispiece featuring a portrait of Wheatley by Scipio Morehead. Along the top of the portrait are the words [PHILLIS WHEATLEY, NEGRO SERVANT TO MR. JOHN WHEATLEY OF BOSTON].

The piece based on this item is a brilliant work by Philip Smith, who explains his process below in detail in his own words.

“The reason I chose this item from the list of Smithsonian Treasures was, I think, because it looked like something I might instinctively shy away from, or think, “that’s not mine to explore.” It’s a book of poems, published in 1773, written by Phillis Wheatley, “a young Negro Girl, who was but a few Years since, brought an uncultivated Barbarian from Africa.” The horrific language of that description is from the book’s introduction, in which her “master” addresses the public to confirm that these poems really are the work of his slave. 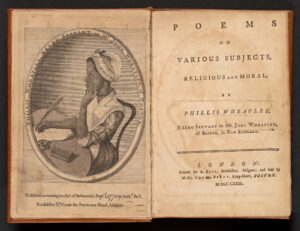 “I found it an intense and confusing document to engage with, knowing the context of its creation, and even more so as I began to explore the poems. How she crafts iambic pentameter, and brings such richness of sound and image together in her invocations of nature – this really grabbed me (lines like: “And nectar sparkle on the blooming rose.”); but I felt resistance to all the talk of heaven (most of the poems are elegies for the recently-bereaved, called “On The Death Of … ”). There are poems in which she describes her own story as one of salvation – lines like “’Twas mercy brought me from my Pagan land”; alongside other passages, like this one, where she lays out her anger and grief:

Should you, my lord, while you peruse my song,
Wonder from whence my love of Freedom sprung,
Whence flow these wishes for the common good,
By feeling hearts alone best understood,
I, young in life, by seeming cruel fate
Was snatch’d from Afric’s fancy’d happy seat:
What pangs excruciating must molest,
What sorrows labour in my parent’s breast?

“I am grateful for the invitation to respond to this Smithsonian item. Reading the book of poems made me touch on the sadness and fear that I feel around the implications of my whiteness and my maleness. It made me feel angry about our past, and shameful of – and frustrated by – my complicity in the refusal of some parts of self and society in the UK (and America) to dismantle colonial attitudes and address racist structures, mental and social. I felt drawn to trying to express something of that by using Wheatley’s words.

“I started by collecting phrases from across the book and reordering and reassembling them into short choruses and mantras. I was drawn to fragments of text around the oft-repeated phrase “on the death of”, as well words that refer to existence – “endless”, “breath”. I noted down lines that, taken out of their original context, seem to address the reader directly: “How soon would you each sigh, each fear dismiss?”

“InitialIy, I asked a friend in the US to read the extracts, and thought about finding an African-American actor as I feared erasing or misrepresenting Wheatley’s experience and story. But through conversations, and with some time, I realised that I was being evasive, looking to hide behind other people’s voices rather than being up front about the fact that it was my own response to Phillis Wheatley’s work.

“The piece that has emerged is called “Torn”. This word is one Wheatley uses to describe death (the image of a branch ripped from the tree), and it echoes the violence of the transatlantic slave trade in which children were “seiz’d” from their parents. “And sure ’tis mine to be ashamed, and mourn” – I sing this line as a lament, inviting myself to engage with Wheatley’s story, acknowledging my positionality as a white British man and the responsibility we all have to learn from the “evils past”. In the middle, Wheatley’s words are heard in celebration of nature – the divinity of mountains and forests; but the idyll is ruptured, sonically, by the returning violence of human brutality – the ripping apart of families and community.

“This piece is just a response. To understand Wheatley’s world and experience and art is to read her poems. I hope this piece will invite you to do so!”