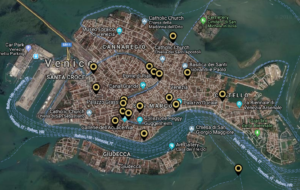 Welcome to the Cities and Memory Venice guide. As we’ve previously discussed in this article, Venice is our favourite city in the world for recording sounds – the lack of cars, replaced by the famous canals, combined with Venice’s particular size, layout and architecture offers a soundscape like no other in the world. It’s a truly unique place to listen to just as it is to see.

As such, there are many incredible sounds you can expect to hear as you walk around the city, which will define your visit to Venice as much as any of its sights – here is our Venice guide to the sounds of the city.

Venice is defined by its waterways, and none is more important than the Canal Grande, which flows through the centre of the main island like an artery. The sounds of Venice’s canals are, of course, totally mundane and part of everyday life for its residents, but necessarily define it and a visitor’s ears are drawn towards the splash of water breaking on the banks, the cries of gondoliers and traghetto oarsmen, and the steady hum of passing boats.

Piazza San Marco is the visual epitome of Venice, with the Basilica di San Marco, the towering Campanile, the Doge’s Palace and the vast, grand square itself, lined with (incredibly expensive) cafes. As a soundscape, unlike many tourist hubs, it remains fascinating as the square is on a large enough scale to keep the sounds open and moving, rather than a cacophony of tourists. Instead, as you wander round, you will hear voices from all over the world, music drifting out from the in-house musicians at the cafes, the intensity of sound as you enter the square from its crowded and narrow entrances into its openness, and if you’re there at the right time, the defining soundmark of the bells of the Campanile, as in this recording.

The vaporetto is the public transport system of Venice, large passenger boats that dispatch people all over the main island, and to more distance destinations like Murano, Burano and Lido. The engines of the vaporetto, the clang of the docks as it comes in to moor briefly at frequent stops, and the calls of the vaporetto attendants are a sound not easily forgotten.

For a more tranquil journey around the city, you can pay a small fortune to be ferried around by one of Venice’s visual icons, the gondola, or you can take a cheaper and more pragmatic rowed trip across the Canal Grande on a traghetto – both are distinctive sounds as well as experiences.

5. The bells of Venice

Venice, of course, has hundreds of churches, from the huge and magnificent to the smaller and more humble, and almost all have their own distinctive bell sounds, as bells cast across hundreds of years ring out. A fairly recent addition to the Venice skyline is the rooftop terrace at Fondaco Dei Tedeschi, which offers spectacular views across the city. If you arrive at the right time, you’ll also be treated to an incredible soundscape of bells across the city all ringing in unison to mark the hour, or to call the city to mass.

The bàcari – tiny bars (often standing room only) across the city offering cicchetti, the fantastic local cuisine, and drinks to locals and visitors alike. Their intimacy and manner of operation makes them a distinctive experience, and the hustle and liveliness of a bàcaro, along with snippets of Venetian dialect, make this a must-hear experience (and the food is pretty incredible too).

Venice is a city for walkers, and the sounds of walking are rendered even clearer by the lack of cars and the small passageways (calle) and squares – but it’s also obviously a city of bridges. Four main bridges cross the Canal Grande, of which the most famous are the Rialto (now a chaotic run of tourist shops and selfies), and our favourite, the Ponte dell’Accademia. This is a beautiful wooden bridge with shallow steps, lending it a particular sound different from most other bridges in the city – and the pattering of footsteps across bridges is another sound that will define your visit.

As well as this Venice guide, you can explore the sounds of Venice – and their reimagined, recomposed versions – in our interactive Venice sound map: