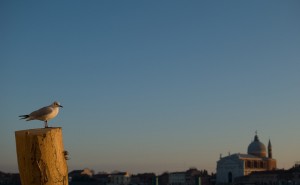 Today’s sound goes back to the spiritual home of Cities and Memory – Venice. The title of the project comes from the astonishing book by Italo Calvino, Invisible Cities, in which Marco Polo recounts to Kubla Khan his voyages to imaginary cities around the world, detailing his extraordinary memories of what he’s seen. It transpires that he is really talking about Venice in lots of different ways, highlighting that different people’s interpretations of the same place can be wildly different, effectively making every place a different place to each individual, according to how they experience it.

I also have a strong personal connection with Venice, having spent many hours field recording and taking photos here as part of my own experience of this wonderful place. As much as my current hometown, Venice is the beating heart of Cities and Memory.

It’s an extraordinary sonic environment too, due to its uniqueness – not a car in sight, a collection of canals, islands and stunning beauty that shifts according to the season, the amount of people and the time of day. There are isolated pockets of calm, there are areas of total chaos and commerciality (take a bow, San Marco), but most of all this could only be Venice.

This sound was from a sunny walk along the Fondamente delle Zattere, which faces across from the island of Giudecca. It’s a wide open, broad street along the side of the lagoon so it feels unusually spacious and coastal compared to the inner maze of Venice the city, and is characterised by platforms along its length for boat docking and so forth, which rattle and clang in the breeze. The original recording has an offbeat rhythm from the clanging which I initially thought I wanted to use, but the piece ended up just sounding like the inside of a factory. So I went for something that starts with the organic sounds of splashing water looped up, and as it builds becomes more synthetic and electronic, until by the end pure tones replace the sounds of waves – in the memory, the remix takes over and replaces the natural sound entirely.

listen to ‘Clanging water platform in Venice’ on Audioboo