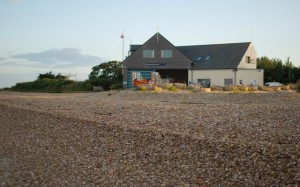 Sometimes you just know a sound too well, and it’s best to pass it on to someone new to have a listen to. The sounds from my band’s visit to Hayling Island to record a 12″ (available here, plug plug) have been part of a very familiar sound world for me for a couple of years, being used as samples when the band plays live, and mixed into songs on the record too. In fact, this sample is included on the song ‘Alba Adriatica’. So I thought that rather than remix the sound myself, I’d hand over the task and see what happened. Oxford sound artist and regular contributor Lee Riley came up with this bitcrushed, digitally-mangled manipulation of the waves on Hayling Island beach as a result.

It’s fascinating to see how other people approach the same sound, especially one so familiar to everyone as waves on a beach. I wonder if 100 different versions of this sample would sound different to 100 different people’s imaginations…

listen to ‘The sea at RNLI Hayling Island ’ on Audioboo