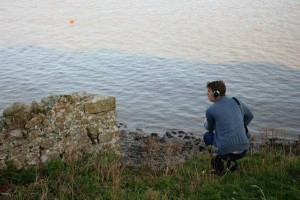 A nautically-themed Friday afternoon. On a recent visit to Flat Holm Island, I became very interested in the island’s history, dating back to the Bronze Age. But the most fascinating parts were around the island being a base for smugglers in the eighteenth century (mainly contraband tea and brandy), and around its treacherous coastline. With no lighthouse and some rocks known as ‘The Wolves’ for their distinctive shape posing a real threat to passing ships, from the 1700s onwards quite a few ships were lost off the coast of the island.

Listening back to my recording of waves on the landing jetty where we first arrived on the island, I became interested in the idea of the ghosts of sailors from the island’s history still being very much a part of the island and its surroundings. So for the remix I’ve blended in some ghostly, reverby traditional sea shanties, imagining the ghosts of sailors past gliding past the island by night.

listen to ‘Waves on the jetty, Flat Holm Island’ on Audioboo

listen to ‘Sea shanties off the coast – memory’ on Audioboo