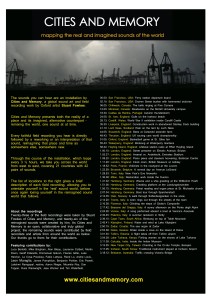 We’re very happy to be taking part in the Kymmata exhibition at the O3 gallery in Oxford, which launches today. Cities and Memory will be the sound element of this multidisciplinary exhibition, with a soundscape composed of a seamless mix of field recordings followed by their reimagined counterparts.

Through the course of the installation, which loops every 3 ½ hours, we take you across the world from west to east, from San Francisco to Brisbane, covering 21 countries with 42 pairs of sounds.

The exhibition runs from 12 noon to 5.00 pm from Wednesday 28 to Friday 30 January, with live performances (interspersed with Cities and Memory sounds) from 12 noon until 4.00pm on 31 January and 1 February. The O3 Gallery is part of the castle complex in Oxford and you can find it here and more about the exhibition here.