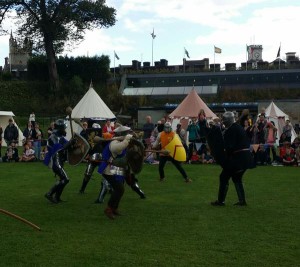 We’ve reinvented history today, with a visit to a medieval pageant at Cardiff Castle. The pageant featured mock battles between medieval knights, complete with commentator offering encouragement, whipping up the crowd and describing the action – all good family fun, with an audience mostly of parents and children cheering on the reconstructed pseudo-historical action.

For the reimagined version, I’ve tried to imagine what it was like for one of the many children in the audience to be taking all of this in, imagining the battles to be real, the actors to be heroes and villains, and the whole thing to be as exciting as watching a battle scene in a Ridley Scott epic. As such, I’ve taken a different approach from what’s typical, taking the music from a battle sequence in a 1940s medieval movie and overlaying the commentary from the reconstruction – turning this afternoon of family fun into a dramatic battle sequence straight from the silver screen.

listen to ‘Medieval melee at Cardiff Castle’ on audioBoom

listen to ‘The Cardiff knights vs. Henry V’ on audioBoom