I distinctly remember taking this field recording of a football match at Port Vale vs. Sheffield United last December – the temperature was well below freezing, it started to snow heavily during the match and by the time we got half way home we were 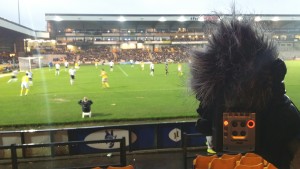 effectively in a blizzard. But the atmosphere around the ground was somehow intensified by the fact that everyone was freezing, raising their noise and energy levels to keep warm.

The recording was picked by Wolfgang Dorninger from Linz, Austria, using the Oblique Strategy cards Always the first steps and It is quite possible (after all). Wolfgang writes:

“I love the acoustics in a stadium, the singing, the fast change from frustration to euphoria, but also the sound of ols amplification systems in mid-size-stadiums. so I started with the stadium speaker, the audience singing, kids crying and clapping to support a jingle.”
“Depending on the high level of adrenalin during the game, the aggressiveness paired with the unanimity in choral singing parts we talk after the game about the game on a high poetic level. but we never hear the high poetic level within the play.”

“So I filtered away the obvious of the recording to get into the tonal base score of the whole recording. and best, it is quite possible to find the poetic within the ambience of a stadium recording (after all).”

listen to ‘Finding the poetic at a football match’ on audioBoom