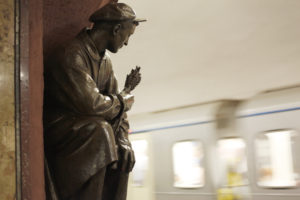 Here’s the first of the reimagined sounds from our recent trip to Moscow to speak at the Moscow Urban Forum – on the platform of the beautiful Ploshchad Revolyutsii (Revolution Square) metro station, listening to the trains arriving and leaving.

The Moscow metro is one of the city’s most incredible features, with every station being beautifully ornate – at times it’s more like exploring a palace or a museum than taking public transport. We fell in love with the metro during our visit, and spent several hours just travelling from station to station to see and hear the highlights.

For our reimagined sound, taking an extreme approach to EQing samples from the original recording, we’ve stripped the very top out to simulate the sounds of rain, and we’ve EQed right down to the lowest frequencies to represent the sounds of thunder.

A light bit of reverb and tape effects to smear the edges of the sounds a little, and we have a rainstorm constructed entirely by EQing the original recording.