Looking back, we’ve been compiling our annual best albums of the year lists since 2014, which makes this our eighth attempt at summarising our favourite music from the last 12 months (first winner? Einstürzende Neubauten in 2014).

Whereas last year’s unifying thread among our favourite albums was an attempt to tackle the themes and politics of the year head-on, this year we’ve found the word “detail” sums up the finest music of 2022. Our favourite albums rewarded us most strongly when we dedicated close attention to them, revealing layers of intricate detail within their workings.

What happens when you fuse traditional Sufi music with ambient electronica? This gorgeous, graceful selection from Istanbul-based producer Sinemis, which is a bit minimal techno-ish, a bit ambient soundscape-esque and a really clever blend of traditional elements in a non-obvious way to create something that very much forges its own path.

19. Esmerine – Everything Was Forever Until It Was No More

What a treat to have Esmerine back with us, with a sound that continues to evolve from album to album. While for my tastes they’ve never quite topped the Arabic vibes of Dalmak, there’s some beautiful stuff on this album, which is worth the entrance fee for “Imaginary Pasts” alone, a track that easily sits among their finest work.

Time for some oversaturated Afghan-American street music from Naujawanan Baidar. They blend traditional Afghan folk music and instrumentation with an absolutely pounding production style to create a maximalist, percussion heavy and distortion-led album with distinct “what if Faust were from Kabul?” vibes. Turns out if Faust were from Kabul, they’d sound like this and be very good indeed.

The formal minimalism of Steve Reich meeting the visual abstractions of Gerhard Richter – sounds like a marriage made in heaven, right? And a recipe for some of the best album artwork of the year too, obviously. Present and correct are all the Reichian pulses throbbing away through rhythmic repetition, but the final piece also offers a welcome, contemplative pace change.

As ever, the compositional process is fascinating, consisting of deconstructing the patterns from a Richter painting, with aspects like stripe thickness corresponding to pattern length – beautifully giving the piece its unique character without imposing unnecessarily formal restrictions.

Well, who knew Mono had this in them? Just when you thought you had them pegged as the world’s finest peddlers of emotional heft via plonk-plonk-plonk-CLANG post-rock dynamics, up they pop with a masterful exercise in control for their first soundtrack work. Personally I’d have put money on them heading down the epic Clint Mansell/Hans Zimmer route, but this sees them focus on synths, dusty loops and pianos, sidelining the epic for the quietly lovely. It’s really great.

15. ILUITEQ – The Light Inside, The Dark Outside

Back for their second run in our best-of list are do-no-wrong Italian ambient soundscapers ILUITEQ, who make music so warm you could sit around your speakers in midwinter and feel perfectly cosy. Inspired by the chaos and uncertainty of the Covid-19 lockdowns to create something healing (but not in a way-out new age way), this absolutely hits the mark.

Enough has been written about the back story of this album, but suffice to say it’s an extremely brave and necessary release. Beneath the prettiness and clarity we’ve come to expect from her songwriting is a very direct, at times brutally dark lyricism which managers to remain understated at the same time. There are plenty of songs called “This Is Love”, for instance, but none of them sound quite like this one. It’s good to have her back, whatever the circumstances.

It’s time for the Middle Eastern psych-rock section of the list with some desert grooves courtesy of Al-Qasar, and a stellar array of guests including Lee Ranaldo and Jello Biafra. Electric saz, tbila and darbuka blend with some extremely scuzzy guitar and vocals that come across more like invocations to create one of the most intense listening experiences of the year. The band themselves call it “Arabic fuzz” – works for me.

Another busy year for the almost impossibly prolific 12K founder Taylor Deupree, who managed a release for every season of the year (culminating in the also-lovely Small Winters). Harbor was the highlight, not so much music as a sonic flotation bath you can just sit in for half an hour, gazing around inside at all the intricate patterns sculpted into the walls and wondering what on Earth the source material for that drone, click or pulse might have been.

Top tip – open up this album in three tabs and hit play on each after waiting a few seconds to get an amazing multi-layered delay-effect listening experience.

OK, who misses Can? For anyone needing some prime 1970s krautrock vibes back in their life, but who have worn out their copy of Future Days, look no further than Minami Deutsch, who tie a love of the straightahead repetition of minimalism (or indeed Neu!) with melodic grooves to produce this absolute blast of an album. It has the Can tributes down to a fine art, including that delightfully-warm bass sound and proper Damo Suzuki-esque whispered vocals, but it’s far from pastiche and very much its own, highly satisfying beast. Had I not discovered this literally last week, it’s likely it would have found its way much higher up on the list.

You know what you’re going to get with a Rival Consoles release by now – a producer at the top of his game, developing textures that sound like nobody else into a succession of what we might term “delicate bangers”. A little less rhythmically-driven and immediate than other albums and as such coming across a little more understated, but once it gets under your skin, it’s pretty clear that every track here is a triumph.

9. The Smile – A Light For Attracting Attention

The parallel universe Radiohead, in which Thom and Jonny cut loose and wig out with a drummer who brings a totally different vibe. Had this come out as the new Radiohead album, everyone would have gone away happy talking about their new exploratory, wigout direction – as it stands, it’s easily the best side project release to come out of the band’s camp.

Also kudos for the title, which ensures that I will now think of this album every single time I board an aircraft. 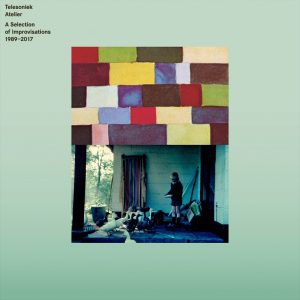 A throwback to the heady days of synth explorations, modular pioneers and wobbly sci-fi soundtracks with this stellar release from the mysterious Telesoniek Atelier, who seems determined not to let you discover or listen to his music unless you buy the actual record (not a trace on Bandcamp or YouTube that we could track down). Well worth the effort once you do, though – this is a delightful collection of meditative mood pieces built from classic hardware like Prophets and Oberheims. Check out the clips here then try to avoid splurging on the collection.

There’s a lot to be said for a strong name, and this is a strong name – seeing it on a gig poster in London was enough for us to check it out once we got home, and then be very glad we hadn’t misremembered it as Milton Keynes-Bedford Architectural Programme or something. This is very much from the Craven Faults/Pye Corner Audio family of hauntological, wobbly modular synths backed by brutalism-inspired artwork. Blade Runner, if the replicants had set themselves up in Telford.

Another instant classic from Daniel Avery, the kind of album that feels instantly familiar (in the best possible sense) as soon as you hear it, as if it’s somehow always been in your life. It covers a lot of ground too, from the feedback-drenched piano lines of “New Faith” to the propah old-school drum ‘n’ bass of “Devotion”. Without question one of the electronic albums of the year.

5. Makaya McCraven – In These Times

A huge cast of guest musicians, five studios, countless days of post-production work and more than seven years in the making, but the triumph of In These Times is that it sounds like it was smashed out in one spontaneous hyper-creative live session. Another album that can sit quietly in the background if you let it, but if you swim into its detail, it’s jaw-droppingly accomplished, eloquent and fluid. Stunning work from a supreme talent.

OK, into the top four we go, and I would not have expected to be placing a video game soundtrack up here. Truth be told, I know nothing about said video game (though it sounds interesting), and this is no ordinary soundtrack.

Tape-’n’-operatic-vocal guru Ian William Craig is at his peak here, spinning out magnetic hymns that seem to stretch for hours even as they stretch themselves to breaking point. There are levels of absolute beauty here untouched by anything else released in 2022.

Repetition. Repetition. Glorious repetition. This is nothing more – and nothing less – than three masterful musicians finding a groove, locking into it and feeling each other out over four amazing tracks, subtly, slowly and majestically altering the loops and grooves as they go. Every detail is essential, every change is necessary, and nothing extraneous is allowed to happen. A practically perfect demonstration of control and poise.

I don’t think I’ve lost myself in any record more than this one in 2022, and it’s hard to explain how perfect this is in its complex simplicity. Floating piano figure dance around overhead, while underneath the occasional warm pulse swims past, and mysterious field recordings of birdsong, footsteps,snatches of conversation and obscure street sounds are half-hidden, occasionally rising to the surface in a way that makes you unsure if they’re on the record or part of a Cageian way to explore the gaps in the music. This is a totally mesmerising and wondrous experience from start to finish.

Even in a year so rich with musical delights, the number one record on the list is so far ahead that it can’t even see the others in its rear view mirror. Spirit Exit is quite simply the finest example of what extraordinary music in scope, virtuosity and emotional heft can be created with modular synths.

The mastery on display here is exquisite, but technical accomplishment only gets you so far – every tweak of the attack envelope, every adjustment of delay and reverb somehow carries a soaring emotional weight. Each individual sound in the palette has the wonderful warmth and depth that only modular systems can somehow conjure up – and the compositions are wonderful, absolutely playing to the strengths of the instrumentation. On top of this, we were lucky enough to catch the associated live performance at the Barbican this year, and it was absolutely one of the most thrilling live experiences of the last five years.

Brava, Caterina – our meagre offering in exchange for this towering achievement is this album of the year gong —> 🏆