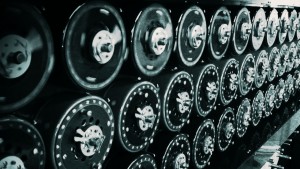 Long-time Cities and Memory contributor Matt Parker, whose work recording the sounds of the internet has previously featured on the site (along with a contribution to our #HamburgSounds project), sends in a new submission as part of his work with the UK’s National Museum of Computing.

His fascinating new memory piece presents us with some of the sounds of electromechanical decryption and his reimagining of them) – The Imitation Game comes to Cities and Memory!

“I am currently working at The National Museum of Computing, Bletchley Park to produce a sonic archive of the technologies housed in the museum that include some of the world’s earliest digital computers and other historic examples of early computing technologies. A precursor to the digital computer was the Bombe, an electromechanical decryption machine created by Alan Turing (That fella in The Imitation Game film). Within the museum, there is a replicant of the Bombe which is fully operational and used to provide demonstrations for the public on a daily basis.”

“During the height of World War Two, Bletchley Park was home to the Government Code and Cipher School (The British Intelligence Service). It was an incredibly high security facility where an entire population lived ‘on site’ working with top secret documents and technologies to uncover intelligence for the army. Whilst now there is only one functioning Bombe replicant, during wartime, there are rows and rows of these machines operated by the all female ‘Wrens’ who were responsible for inputting and recording the data from the Bombes.”

“I have been fortunate enough to be given access to record the remaining Bombe and have consequently tried to work with this object, a memory in itself of the small thriving and enclosed city of the Government Code and Cipher School at Bletchley Park from the war. The memory explores the difference between one machine we hear in isolation today and the stifling noise, pressure, temperature and tension of Hut 11; one of the operational huts for Bombes at the time.”

listen to ‘Bombes of Bletchley’ on audioBoom

listen to ‘The Imitation Archive’ on audioBoom