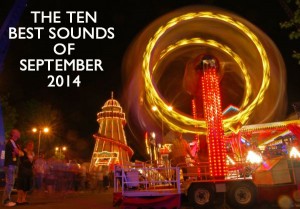 Wow, where did September go? I’m heading to Hamburg in a few days, which will be the major focus of Cities and Memory throughout October, but before then here’s a summary of the best sounds we’ve heard on the site last month.

It’s been a UK-heavy month, with just England and Italy represented, but a total of seven sound artists (if we can include ourselves among that number!) have tackled a range of sounds and come up with treatments including industrial beats, abstract noise, beautiful ambient music and arpeggiated synth melodies.

Explore the places and their sounds below!

Oxford, England: A lion, a tiger and a crocodile at a funfair (by Mike Bingham)

Oxford, England (via Italy): Making music from the sounds of Italy (by Ian de Quadros)

Oxford, England: Nightmare on the Megadance (by Lee Riley)

Hayling Island, England: The ambient sounds of a stone beach (by Tim Waterfield)

Cornwall, England: Inside the Eden Project: an electronic rainforest (by Aaron Rieger)

Sounds by Cities and Memory:

Somerset, England: Taking our synths down to Blagdon Lake

Liverpool, England: Industrial music built from the sounds of Liverpool

Venice, Italy: The sounds of the Grand Canal, Venice